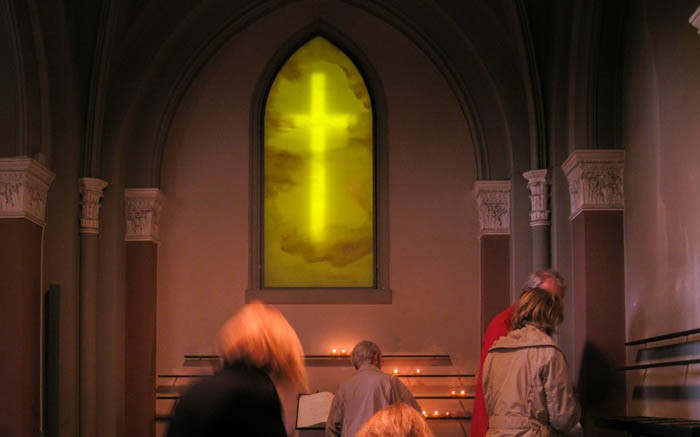 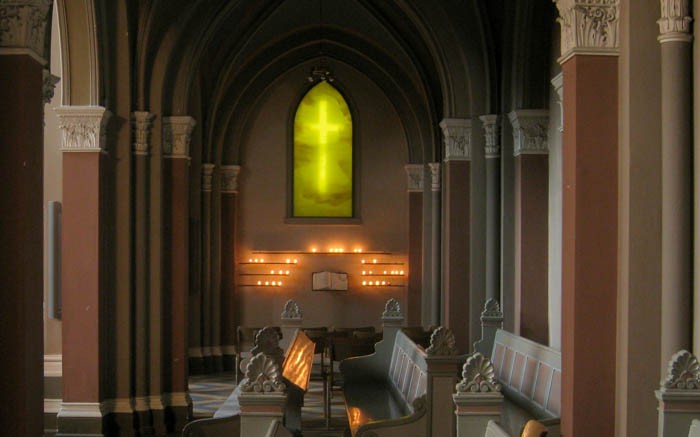 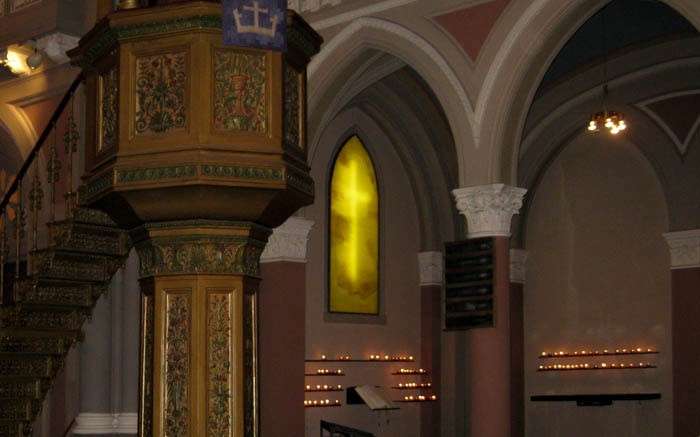 The neo-Gothic Marktkirche in Wiesbaden is the main Protestant church in the capital of the state of Hessen.

A design was required for the candle and prayer corner. This is located opposite the entrance in the front wall of the right aisle; it extends over two bays ??? and can be seen directly upon entering the church.
The parish wanted the area to have a unified aesthetic design. In concrete terms, a backlit glass painting was to be specially designed and made for this area along with a place to display the prayer book, candles and a stand offering candles.
I also discussed the issue of ambient light and seating in the candle corner at my first meeting with Rev. Dr. Holger Saal and Rev. Martin Fromme.

The design was based on my desire to help church visitors find inner peace, a contemplative composure – combined with a contemporary form which could be integrated into the existing architecture without the difference between ‘old’ and ‘new’ becoming an expressive attention-catching statement.

My suggestion for the lighting was thus to leave the existing ceiling lighting in place, if possible, but to fit it with lower intensity light sources, or alternatively, make it possible to regulate the intensity of the candles.
As for the seating, I thought it would be attractive and functional if one or two of the existing benches could be shortened to the width of the side aisle and placed parallel to the front wall.

I suggested a backlit glass painting for the front wall. The glass painting would be fitted into the existing neo-Gothic “mock window” to create the impression it had always been there. I also wanted it to be clear that this light from the window did not come from our actual living space.

The glass painting is designed in graduating yellow tones. Inspiration was derived from a cloudy sky in remembrance of the situation in Golgotha. But the colors are not black – they comprise a palette of yellow tones which can be reminiscent not only of the darkest hour but also of the “heavenly gold” the “light in the darkness”. In this way pain and consolation are addressed through the cross which appears as a light through this sky.

The illuminated cross is formed from dimmable LED lights.

The prayer book holder is fixed on the wall beneath the glass painting, surrounded by seven candle holders. These are formed from metal rails of various lengths attached vertically and at different distances from the wall. Those making a prayer book entry in the Marktkirche in Wiesbaden stand beneath the cross, surrounded by light.

In order not to jeopardize the ‘lightness’ of the front wall and to keep opportunities for displaying other candles, three more candleholders have been integrated on the side wall in the first bay (Joch???) along with a device offering candles.