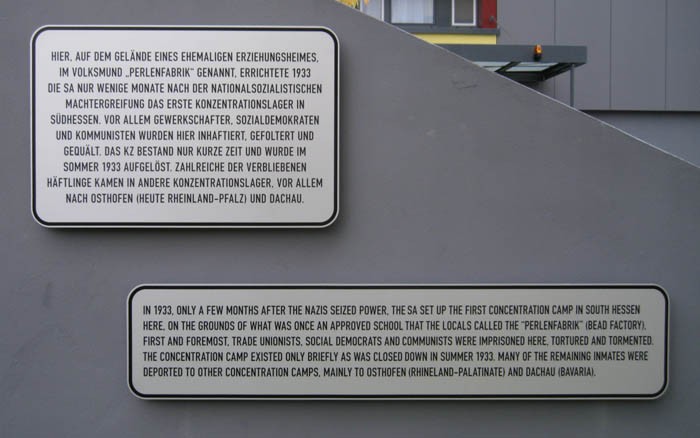 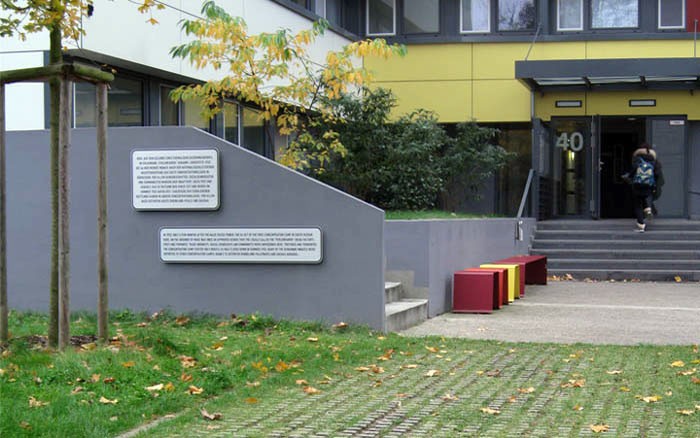 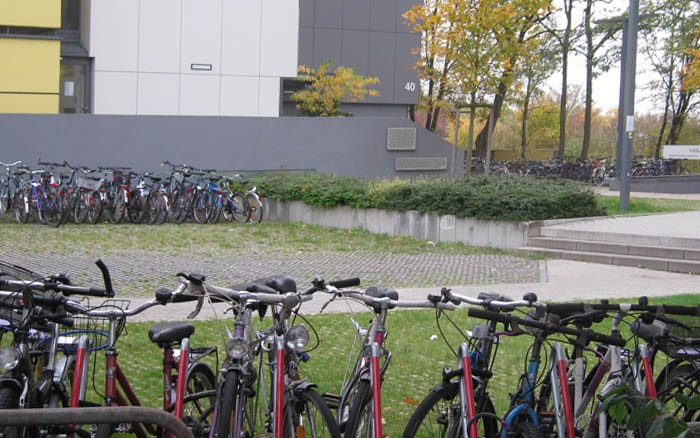 The principal function of the memorial plaque

is, in my opinion, to provide information on history / on the way that a site was used at a particular time in the Third Reich. The people affected by the Nazis criminal actions are not mentioned in person in the text but are assigned to specific groups in society.

The location of the memorial plaque

is a student hostel, a place of temporary residence for young, educated people. Its sophisticated, contemporary design has been realized in a simple way.

takes its cue from this understanding of both the plaque’s function and its location.
The design avoids the received aesthetic approach, which hinges on premium materials of outstanding quality for memorial plaques. Instead, an approach was chosen that used “ordinary” materials and an “ordinary” design, and is reminiscent of the usual signposts while offering a completely new interpretation in the form of the plaque’s specific design.
The person contemplating the plaque sees something that is at once familiar and strange. As I see it, in this location an unpretentious look seems to be the best possible solution for a plaque with this kind of content.
The dimensions and the font of the German writing on the sign comply with the DIN standard for road signs while the actual size of the plaque does not. The English-language text does not meet the DIN standard but has different dimensions (it is three times as long).

Similarly, unlike most customary signage, the surface of the plaques does not resort to the use of color. With their natural hue, the two epoxy-coated aluminum plaques are weatherproof and, with their simple, gray appearance, are in complete character with their sorrowful contents and dimensions. Mounted so they seem to be hovering in front of the wall, the plaques can be attached without visible screw heads.

In 1933, only a few months after the Nazis seized power, the SA set up the first concentration camp in South Hessen here, on the grounds of what was once an approved school that the locals called the “Perlenfabrik” (bead factory). First and foremost, trade unionists, Social Democrats and Communists were imprisoned here, tortured and tormented. The concentration camp existed only briefly as was closed down in summer 1933. Many of the remaining inmates were deported to other concentration camps, mainly to Osthofen (Rhineland-Palatinate) and Dachau (Bavaria).

Period of project: March through November 2014