General director Kunstsammlungen Chemnitz
Opening speech on the occasion of the 16th “Kunsttreppe” exhibition with works by Bernd Fischer, March 29, 2009.

Bernd Fischer considered it especially important to integrate his works in the existing collection. His works thus look natural in the context and not like works which have pushed others out to make space for themselves.

The idiosyncratic presentation of the works is thus only revealed upon second glance.

It starts up here with pictures of little grebes whose bodies are half under the water surface. The fluctuating bottomless state in which there find themselves is accentuated by technology and the way they are hung which lends the swimming birds a suspended state in front of the sky. Technically speaking it consists of black paint on glass. The color used is a ceramic glass paint color with the property of being able to be used on both sides.

Bernd Fischer takes the liberty of painting on just one but also on both sides. The medium, delicate square glass panels are framed in fine lead glass and hung on graceful chains. This restrained presentation of the motif underlines the swimming, suspended character of the bird. A feature which most observers do not notice and which ignores almost all artistic presentations, is the bisection of the bird through the refraction of light in the water.

Here, Bernd Fischer illustrates a motivating perception in saying that the most of what moves man is invisible. Be it feelings or thoughts reflected in a face – here it is the little grebes above or under water, or the iceberg and the rest of the iceberg tip. The visible is always related to the invisible in an enigmatic way. 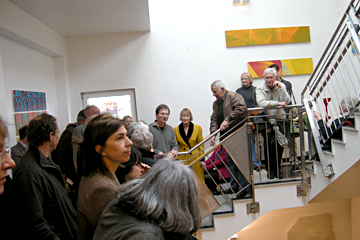 Bernd Fischer’s theme is about understanding the world in which he lives and of which he is a part with limited human possibilities. In so doing he knowingly invites the burden of Sisyphos, in other words the insolvable tasks which belong to the world, what the eye sees and what it does not see; what man knows and what he believes. This world perception runs through the creative thoughts and works of Bernd Fischer like a leitmotif.

His astronaut pictures, bought some years ago by Degussa AG, already show the limitedness and fragility of man. If we remain with the image of the iceberg, the tip, i.e., what you perceive and understand is infinitely smaller than the rest of the iceberg which one does not see. Modernism replaced the myth of Sisyphos with the myth of the sinking of the Titanic.

Bernd Fischer’s interest in the relationship between the visible and the invisible has seldom found a more suitable exhibition space than here at the Kunsttreppe in the Heiligen Geist Hospital.

Physicians as well as artists belong to professional groups who not only want to but must see what is invisible behind the visible. Here, too, the limitations of human perception are expanded with the aid of technical means which find themselves in increasing acceleration.

One can well understand that Bernd Fischer is fascinated by one of the pioneering medical achievements, the x-ray. In it he sees a parallel to the concept of art. Finding visible formulations for invisible content. The x-ray image inspired Bernd Fischer to focus on pictures of people, beyond the visible.Although he began his artistic career predominantly as a painter and illustrator today he also places makes uses of the technical processes of our times alongside traditional techniques. In so doing he uses the visual possibilities of new media technology with their special raster scanning. An example of this is the 18-part work “Ohne Titel” (untitled) from 2005. Here the motif is no longer recognizable due to the enlargement of the raster, for the observer it is just a multicolored vibrating rhythm.Cooperating with a technician, Bernd Fischer used a raster which was thee times the size of the industrial standard.

His grappling with the visible and the invisible can also be seen in a four-part work group on multicolored self-made paper with the familiar motifs of ear, hand, eye and foot. It deals with our most important sensory organs which unfold their effects with the help of nerves. If you would create the proportions of the visible, i.e., hands, feet, eyes and ear according to the number of invisible nerve endings, the sizes would be completely different – for example, giant feet, as these feature an especially large number of nerves.

The rasterized works on glass are striking. They are made of filter-free security glass into which the light-resistant ceramic colors are burnt with a centuries-long stability guarantee. In contrast to the pictorial stories in Gothic cathedrals however, these are rasterized motifs made with a screen-printing technique which Bernd Fischer adds to and refines with paintbrush and cloth in order to make the overall impression less technical.

Alongside the stairs from top to bottom you can find works in green, blue and mixed colors.

One can only marvel at Bernd Fischer’s courage in addressing man’s unsolvable problems because already more than 2.5 thousand years ago, Xenphon ascertained that all infinite concepts still referred to the imagining man and thus elusiveness covered all things.

Nevertheless Bernd Fischer, in his study of nature – particularly in observing animals which appear to come from archaic epochs such as the iguana and rhinoceros – consistently tries to explore further levels of the visual for the visible, as you can see in his beautiful drawings, in his water-color and pastel techniques.

The “Kunsttreppe” in Heiligen Geist Hospital in Frankfurt/Main,
A temporary exhibition venue with a permanent presentation of regional contemporary art collections.
A private initiative of resident doctors and Frankfurt citizens.