Transcript of a speech delivered March 10, 2005 by Minister Martin Benn during the presenta-tion ceremony at the Brüder Grimm School

In other words it was the artist’s task to make visible, noticeable and unforgettable what must not be forgotten – in two ways: To lend it an external form and to make the viewer, which means us, internalize the events which have happened so that in our thoughts and actions we can learn something from our memories and act accordingly.
Artist Bernd Fischer’s task is twofold: on the one hand he has to lend a form to what can be named, what is a historical fact, while on the other he has to express what can barely be grasped in words: The death of Julius Flörsheim, his murder by nazis including all the circumstances of that time.

In order to demonstrate how a particularly good form of historical understanding has been merged with an understanding of art I would like to introduce you to Bernd Fischer’s biography and his works.

Bernd Fischer was born in Offenbach/Main in 1954. He studied at the design school (Hochschule für Gestaltung) in Offenbach/Main where he graduated with a degree in design for visual com-munication. Around the same time, from 1974 until 1982, he studied sculpture at the Städel School for Visual Arts in Frankfurt/Main. In 1984 he began to participate in a variety of exhibi-tions and in 1995 he started teaching at the Städel school as a course instructor.

Important works of his can be found in various collections, for example at Museum Würth, the German Ministry of Health in Berlin, the City of Frankfurt/Main, the Protestant Academy in Ar-noldshain, the Deutsche Bank, Credit Suisse, the Volkswagen factory and many other locations.
I offer this list to demonstrate that you have managed to find an artist of standing for your task.

Thirdly, I would like to mention that because of his relatively uncommon education as painter, sculptor and designer and the fields of art thus interwoven, Bernd Fischer is predestined to create things which will meet artistic as well as aesthetic-formal demands as in the case of this com-memorative plate.

He has designed many award plates, for example the Innovation Award for German Industry, the Workplace Investor Award, a commemorative plate for another Frankfurt school, the Georg Büchner School in 2002 “in commemoration of a female pupil murdered by the nazis”. And in a moment I will come to another essential point: in 2004 he made a large work on glass, gaining first experiences with this medium, and here today we inaugurate again a work which was made on glass.

What is the essential theme with which the artist Bernd Fischer deals? His theme is man.

At first he developed figurative images, then astronaut pictures. It is here at the latest that some-thing which is important for the design becomes clear.

The artist Bernd Fischer is trying to clarify something, to lend a shape to something which exists but which appears to be forgotten, which happens to have escaped our vision, which cannot be seen. He attempts to penetrate spheres, moments and peoples’ (our) places of life which usually threaten to escape our control.
After the astronaut pictures follow works on human sensory organs.

Subsequently and until the present day he has made artworks with X-ray images; with the help of these he delves into the essence of man, makes inner worlds visible, alienates and helps man to be experienced anew.

How does he work? A very decisive visual means for him is silk-screen printing which makes it possible to create transparent pictures. This happens because the fields between the sieve are free and can be seen through. It permits the artist to make various layers of images appear behind and on top of one another. Multidimensional pictures are created in this way. In Bernd Fisher’s free works it is sometimes the very planned pictorial accident which makes his pictures so ingenious. With commissioned works such as these he excels in two things in particular and these are par-ticularly successfully achieved in this case. On the one hand a very sharp analysis which the form sets out to give. Julius Flörsheim’s history, the history of people around him, his murderers but also those who have helped him. And secondly, Bernd Fischer has managed to create a very precise design. In this way not only did he manage to create a commemorative plate, and I would like to emphasize this, in my opinion what he created here was a piece of art which succeeds in representing and evoking a lot more in the viewer than what it directly shows. 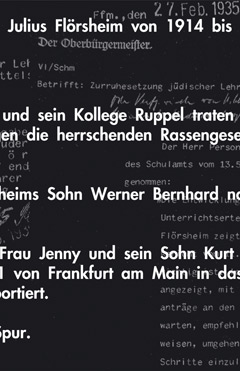 I assume that not all of you have had a chance to see it. I would like to describe it briefly and ex-plain how it came about, because it is precisely here that Bernd Fischer’s essential work finds such a fitting continuation

The artwork consists of two glass panels. Each panel represents a historical time axis. The one behind features a photograph of concentration camp inmates printed by silk-screen. In the center of the picture are printed the biographical data of Julius Flörsheim and these biographical data are cut through by a second printed layer of documents from the time, showing his discharge from school service or contributing to it. The history of the murdered person is shown in the en-vironment which contributed to this history and where it ended.

The second visible glass pane is glued invisibly onto the first one. On this pane one can read quotes from pupils of the school’s extra-curricular history group, called “Spurensuche” (tracing paths) which clarifies what they have learned from this story and which aspects of it they want to preserve in the future. In other words, the second glass panel stands for the present. The pupils are speaking in all of our names. Two time levels are thus directly merged with each other, past and present are intrinsically tied to one another. Let me explain briefly my understanding of the history and then get back once more to Bernd Fischer’s work.

For me history is not a linear event. Now this happens, then that, and later something else. This is how we often perceive it in everyday life. History implies something side-by-side, too. There are many connections to the present. There were the murderers, there was Julius Flörsheim, there were those who helped him. This is an axis. But history has a texture-like quality as well. Things also exist one-after-another. There is also today, which is looking ahead, always directed towards the future, an entangled time texture almost like in Bernd Fischer’s silk-screen. Bernd Fischer succeeds in his work in realizing this historical ‘interwoven-ness’ of past and present creatively, thoughtfully and with an aesthetic precision. 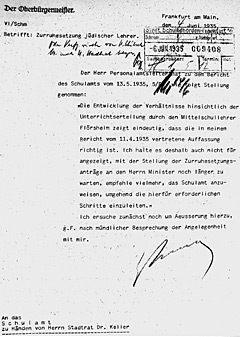 The biography in question here is shown in the context of its history and in its course towards the present. The artist succeeds in making it possible to experience that no life, none of us stands for himself alone. We are always part of the fabric or texture. All of us are historically connected to Julius Flörsheim, his helpers and also his murderers. This we must not forget if we want to pay respect to the memory of those who died.

I believe that here at the Brüder Grimm School something special was achieved. On the one hand great initiative has prevented an important historical event from being forgotten. A place has been created here where this is documented and where it can be experienced by posterity.

Not only will it be a commemoration but also a work of art which is always oriented to the fu-ture, to remembering. In my opinion a wonderful symbiosis has been achieved in this respect. Human history which I have introduced as texture was realized by an artist who from his own initiative:
a. always puts the human being at the center of his work and
b. with silk-screen has the means to interweave various levels of being human.

From this point of view I can do nothing but congratulate the choice of Bernd Fisher. I can think of almost no-one who would have succeeded as well in lending the object at issue here, the re-membrance of the past, a creative shape.

One must therefore thank everybody involved in the completion of this commemorative artwork.

I would especially like to extend my gratitude to Bernd Fischer who has succeeded in showing all of us at a glance where our place in this history is, and what is important for us all to admit to in the future. (L.G.)

» to the commemorative plaque