Excerpt from an address by Ursula König

on the occasion of the presentation of the commemora-tion panels to the school community of Frankfurt’s Georg Büchner School on October 19, 2002:

…It is certainly no coincidence that a connection with Bernd Fischer was established in the con-text of this project at the Georg Büchner School. He is an artist who deals in a particular way with questions such as “what is man”, “how does man perceive the world”, or “how does man respond to the world”.

His main work is characterized by large sized paintings highlighted with X-ray images applied by silk-screen printing. What lies underneath the surface, the multi-layered, is what concerns him. For this reason there exists a very impressive, contemporary form of the portrait theme in his work.
He is an artist who has repeatedly accepted projects from a variety of social groups, with pru-dence. This is how he came to design the Innovation Award for German Economy which is pre-sented once a year. In addition to this Bernd Fischer also designed the Workplace Investor Award which two years ago was extended to include an Investor’s Award for Handicapped Em-ployees.
The Georg Büchner School study group, “Spurensuche” (tracing paths) painstakingly researched the life of former pupil, Lore Breslau, in order to recall her fate to memory. This work of re-membering is now eternalized by two commemorative panels. Bernd Fischer was commissioned to create a commemorative panel for Lore Breslau and for the accompanying poem by Rose Ausländer.
How does an artist deal with such a complex task?

Language is terribly objective in dealing with the suffering hidden behind these short sentences. Bernd Fischer created two panels which could have been one yet which in their wholeness are an expression of their diverseness. A diverseness which points to something common.

Laminated aluminum plates were used for both panels. The text which concerns Lore Breslau’s life can be read in the light colored metal which has been worked out of the anodized black surface.

This girl’s fate, her name, her date of birth and death is extracted from the darkness of anonymity in a way which serves as an example for many thousands, from forgetting into the light of re-membering and the conscious commemoration of a deceased one by the living. 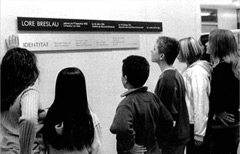 Figure: The mounted plates in the school. Photograph by Klaus Straßheim (from: school publication)

“Humans have forbidden me myself” writes Rose Ausländer. Into her present breaks a dark force of ignoring, dark rule. In her vivid words Rose Ausländer writes about this darkness. Here the facts are reversed. Rose Ausländer is alive, she is standing in the light. As a lyricist, affected her-self, she utilizes her art and reflects on crimes which humans fall prey to. From the brightness of life she makes visible the shadows of human actions.

The text of the poem is inscribed into the upper layer, the light aluminum layer and becomes visible through the black layer of the plate below. The perspectives of both texts share a common point of reference by making an issue of crimes against humanity. The fonts on both plates are the same. The material of the plates is both different and the same.

It is important for Bernd Fischer not to use colors. Instead he uses the material of the layered plates not only as carrier but as language media which points to the content. It is also a contem-porary material he chooses. The size of the plates arises from the amount of text in exactly the same font size, the distance between the lines and the distance to the edges. No color is lighter than white and none darker than black, of light and darkness.
God divided the light from the darkness and god called the light day, and the darkness night. (Genesis 3-5) The artist was concerned with doing justice to the complex content and messages and to the earnestness of the task with as little in the way of artistic means as possible …
(L.G.)

» to the commemorative plaque