Ladies and Gentlemen,
I am honoured and happy that the Helmut Hilde House has purchased one of my pictures. Pastor Barkowski has asked me to make a short speech about my picture.

As a painter I articulate myself through optical media, that means predominantly without words. A traditional saying goes: “Painter, make and be silent.”
The first and last speech I gave on one of my works was 23 years ago. Back then I spoke in Frankfurt at the press conference of a German economic club about a new innovation award I created, the first of its kind worldwide.
Pastor Barkowski asked me to say a few words about the understanding of god my picture was based on. I take this request very seriously, partly because of the place in which the picture will be displayed, but I would like to ask you to understand me in not answering this question.
One of the basic principles I learned from Prof. Croissant during my time as student of the Städel School in Frankfurt, is that what an artist thinks and feels when he works is not the crucial factor. What is decisive for the work, however, is what he is.
During the course of my independent artistic work as a painter, now some 22 years, as well as my work as a teacher at the Städel School for about six years I have confirmed this view many times.
Thus I am unable to answer this in a way that would credibly interpret my work in relation to god – even for myself. What I can do, however, is to offer hypotheses and attempt to give an an-swer which ends with a question mark. 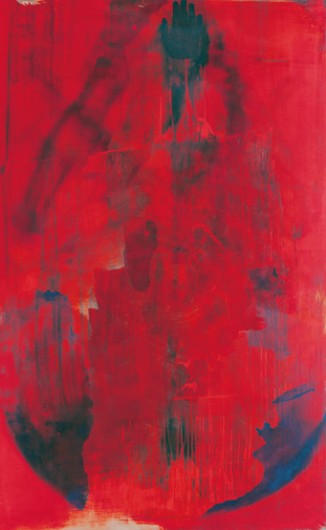 Study of a Body and Space

The question of who I am – which cannot be answered without answering the question of what the world is, is one that has always accompanied me. It is a desire I am driven by which depend on my mood could be either arrogant or recklessly naive. Time and again I find reassurance in art which – in light of the question posed – has become the central place where I grapple with this.
About this I can tell you something which may facilitate your understanding of my picture.

Art, the way we refer to it in Europe today, the kind which is represented in museums, in public, semi-public or private collections, is for the most part art from the period after the birth of Christ.

The appreciation of art in our culture is unthinkable without the architecture, sculpture and paint-ing which was commissioned by different churches. Giotto’s, Michelangelo’s, Riemenschneider’s or Grünewald’s works would be inconceivable were they not commissioned by the church.
In contrast to myself these artists were commissioned to work on a specified obligatory content agreed on by societal consensus and therefore comprehensible to most people. The artists came up with and attended to pictures whose content was generally understood.
During the course of history, and related amongst other things to the decline of religious com-munities as commissioners of work, content which most people in this cultural circle understood, gradually disappeared.
Artists responded by making art the subject of art. For me this development is very interesting and one which I value as a contemporary artist faced with this challenge.
What I cannot so easily accept here is the exaggerated self-referentiality and thus the isolated position in society to which this has lead .
In the middle of the last century, Ad Reinhard, an American painter, reproduced this program-matically by stating: “Painting is painting and everything else is everything else.”
This radical parting of art and life I find convincing in this historical context and in this artistic development.
My own position, however, differs.
For me a picture is always also a picture of something. We are more or less able to see the visible aspects of life. As a painter I work with colors and shapes which are perceived by the eyes in the same fashion as for instance an apple or a snake is perceived. An apple can be eaten. A snake can bite. But what is a picture capable of? You may say that a particular style or artwork means something or nothing to you, that it is your taste or not as the case may be. A color may be lovely or biting. The combination of apple and snake evokes different associations among people of this cultural circle than would a chicken and an egg.

As a painter I work predominantly with colors and shapes. This is the truth of the medium.

How, and in which way I articulate shapes and colors, however, is a question of artistic intention. In other words, a question which touches upon the artist’s self-understanding. Alberto Giacom-etti, one of the titans of 20th century art said sometime in the first half of the 20th century, “The first task of an artist is to identify and determine his own standpoint.” The way I understand it this sentence holds true even today, without alteration, and it will probably turn into a historical one only once the position and function of art in society has changed.
What stories can pictures tell? What content can be summed up in pictures if there is no gener-ally binding – or at least generally comprehensible – content anymore?

The Egyptian pictorial works created between 2,400 and 5,000 years ago in a very different func-tional context than today’s art combine within themselves the representation of a complex nature perceived in a variety of ways and the question of connections between the individual and the whole.
In Classical Greece different ideas of god were visualized in different pictorial creations whose language was derived from the time. Something comparable happens in the picture language of the Bible – my example of the apple and the snake plays on this.
But which elements of our present day life can serve as an expression of what exists beyond time? And how are these communicated?
This is a question which has concerned me for a long time and which eventually led me to the X-ray image.
For over 100 years this technique has been used to gain images of the invisible inside of our bod-ies. At first this was what interested me in addition to the equally fascinating aesthetics of X-ray images. Because here I perceived a parallel to what art means to me: a visible formulation of in-visible content.

Most things that move man are invisible in one way or another. Of course a facial expression, for example, mirrors an emotion or a thought, but it relates to this invisible thing like the famous tip of an iceberg.

Apart from this, what X-ray images show undoubtedly exists. They are images of something which is known to everybody who has heard of the process and in this respect it is possible to generally comprehend the content selected and named by me.

What interests me about the X-ray image is that something invisible comes to the fore as does the generally comprehensible, and is directed towards man. Within the framework of this knowl-edge, the opportunity arises for me as a painter and artist to focus on aspects of being human as a central theme – with the help of X-ray images.

Yet I have no interest in medical diagnosis – otherwise the main reason for using this recording technology. This may, in reference to the example image I chose earlier, be comparable to the biblical perspective of the fruit of knowledge. Here, too, it is of little importance whether it was a fig or an apple (there was once a theological debate over this) and it does not matter at all whether the apple handed to Adam by Eve, in a forbidden way, was of the Boskop or the Cox Orange variety. The far-reaching consequences of this “handing over of fruit” are independent of the concrete image but they have at the same time been expressed in it. (L.G.)

» to the panel picture