Bernd Fischer’s proposal derived from a quote by Gustave Heinemann, retd. Federal President, “The quality of a society is demonstrated in how they treat their minorities,” combined with the graphically appealing finger alphabet with which deaf people communicate. The certificate text only enables the majority – the non (deaf) severely disabled – to understand the statement when it is set in Roman alphabet.
The design of the new plate with its conceptual image was consistent with the existing Workplace Investor Prizes in terms of proportioning, material and size. This made it easy to recognize the connection among the prizes.

Bernd Fischer prepared and presented his design in response to a suggestion by Dr. Ernst Gloede regarding the first Workplace Investor Prize in the Severely Disabled category. In this year the prize was awarded to Heckler & Koch who received a certificate rather than an artwork.
At the behest of Federal Minister, Walter Riester, the President of the Federal Office of Labour, Bernhard Jagoda, and the president of the Rhine-Main Business Club, Dr. Ernst Gloede, Heckler & Koch commissioned this work.
In the following years, all subsequent prizewinners together with Heckler & Koch, received an original image plate as an award for creating the largest number of regular workplaces for severely disabled people. The Federal Office of Labour purchased a copy of the original award on an annual basis.

In 2010 the award was presented again.

In 2000 the prize was suggested by Walter Riester (1998-2002), Federal Minister for Work and Social Policy at the time, and initiated by the Wirtschaftsclub Rhein-Main (Rhine-Main Business Club) and the Bundesanstalt für Arbeit (Federal Labour Office).

Political background: The Federal Government adopted a bill which was to facilitate the finding of jobs for severely disabled people, or make it more attractive for companies to employ them. The prize was brought to life in order to publicize this initiative and create further incentives for employing the severely disabled. The winning company (as with other Workplace Investor Prizes) is determined by the Federal Labour Office based on the employment numbers submitted. The company which creates the most workplaces within one year for severely disabled people in Germany receives the award from the Federal Office, later Federal Agency for Labour and the Rhine-Main Business Club.

» Excerpt from a letter to Bernd Fischer from Wolfgang Forell, Chairman of the Board of the Federal Office for Labour, Regional Management Hesse, Nov. 29, 2005 (german-pdf)

It is hard to imagine anything more absurd than the fact that in 2000, Heckler & Koch were awarded the prize in the “Severely Disabled” category. The Offenbach artist Bernd Fischer states to the present day on his website https://berndfischer.com: “This work is awarded for the creation of the most workplaces for severely disabled people”. On the 32 x 90 x 23 cm plate, screen-printed on aluminum, are featured the name of the arms manufacturer and exporter Heckler & Koch GmbH and a statement by former Federal President, visualized in an alphabet developed for the deaf. Were there to be a prize for the German company whose products have caused the most disabled victims or war cripples throughout the world – this would be a laudable task for the freedom and human rights movement – then this would be due to Heckler & Koch and the licensees of H&K weapons. The Obendorf arms exporter and licensees are responsible for more than 1.5 million deaths and a much higher, barely ascertainable number of disabled – nobody knows if this is closer to two million of five million. Apparently, the Federal Office for Labour and the Rhine-Main Business Club have responded to the fate of severely disabled German persons but not to the victims of H&K arms in the killing fields in Africa, Asia and Latin America …”

Link: » www.fischerkuenstler.de/ German Job Investor Award, Severely handicapped category
Jürgen Grässlin refers to this status of the site which was then updated on Nov 25, 2013

“Dear Jürgen Grässlin,
… I consider the award to be fundamentally a humane one. When H & K offered to provide a plate designed by me to themselves and future prizewinners, this is how I understood the offer …
… One reason – other than those related to the subject of the prize – to accept the commission from H & K to design an award is that we live in a legitimate democracy and not in an illegitimate state. And I hope/assume that injustice is treated as such, or that one can act to have injustice punished –as you, too, convincingly appear to do….

…The prize has been awarded a number of times and the names of the recipient companies are always placed in the same spot. I have no influence on the constellation featuring H & K’s name with Heinemann’s statement in fingerspelling. My design is a general representation of the award theme, as separate from the companies to whom this is awarded …”
(Link:) 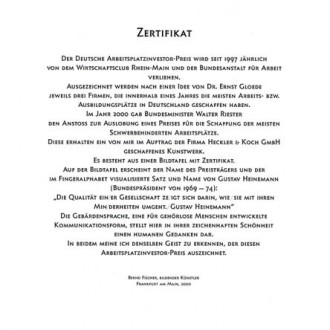