Community Hall of the Protestant Wicherngemeinde 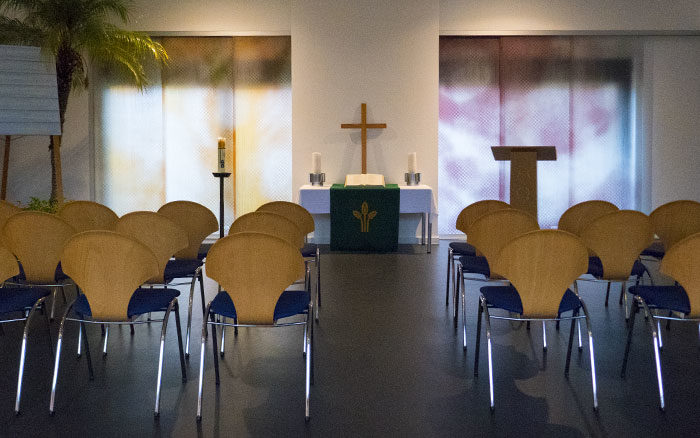 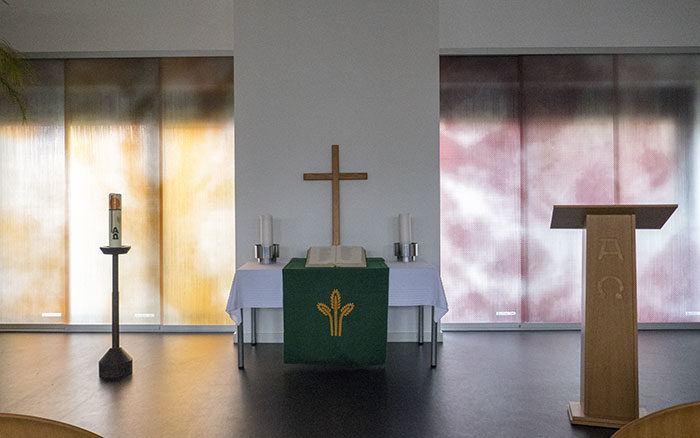 The Wicherngemeinde Parish church was being sold, and the community hall was to be converted so it could be used for church services. The new multi-purpose church space opens up towards the south-east with a window facade and balconies.

A partitioning wall was erected in the central axis of the floor-to-ceiling window that forms the wall. A cross was mounted on the inward-facing side of the partition, the altar stands beneath it.
The guide rails and glass segments have been installed in an interstice in front of the window and behind the partition.
The glass painting can now be pushed in front of the window wall from the left and right hand sides of the space, either next to the partition, or behind the partition. Once thus extended in its entirety, the glass painting envelops the space without closing it off to the outside. This solves the problem of the visual noise created by the balcony railings and inner courtyard, which are visible without the glass painting, while allowing the light to fall into the church space almost entirely unimpeded and tinted in different colors.

In the liturgical context, the radial visual theme of the glass painting becomes reminiscent of the cross by Bernd Fischer for the chapel of the Church Jugend-Kultur-Kirche-Sankt-Peter in Frankfurt/Main