In 2000 I was asked by the principal of the Georg Büchner School, Ms. Gisela Haase, to design a commemorative plate for the school. In 1993 the “Spureunsuche” AG ( “Investigation” extra-curricular work group) began their research at the Georg Büchner School, Frankfurt. Their research followed and documented parts of the life and tragic story of the Jewish pupil, Lore Breslau, during the Third Reich and pointed out the questionable role of the school in the era of National Socialism.* The fate of Lore Breslau was to be remembered on a commemorative plate. 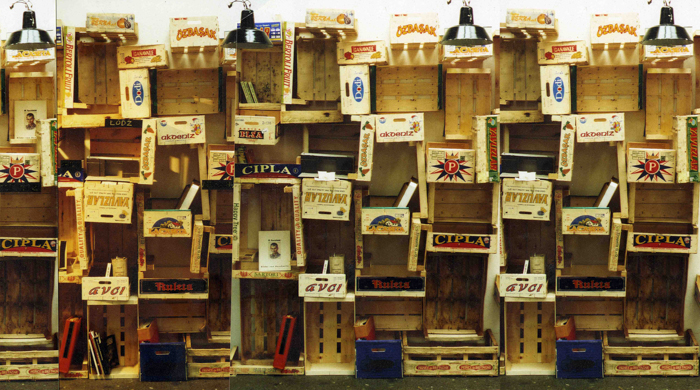 I suggested creating an archive. This would contain the results of research on the subject so far and any future research and would be available to view. I believed this could make it a more vital and effective part of school life. My concrete suggestion was to design a bookcase together with the pupils, whose appearance would be clearly related to its content.
This idea met with a positive response and I was given the task of directing an extra-curricular work group.
The work group prepared three possible designs. I designed a fourth. A true-to-scale model was made of each of the designs along with photos and drawings. Tables and stools built specially for the purpose would allow it to be exhibited in different places or in the school.
The project was not realized due to fire protection requirements which have since come into effect. It would have either compromised the original design concepts or been too expensive to build.