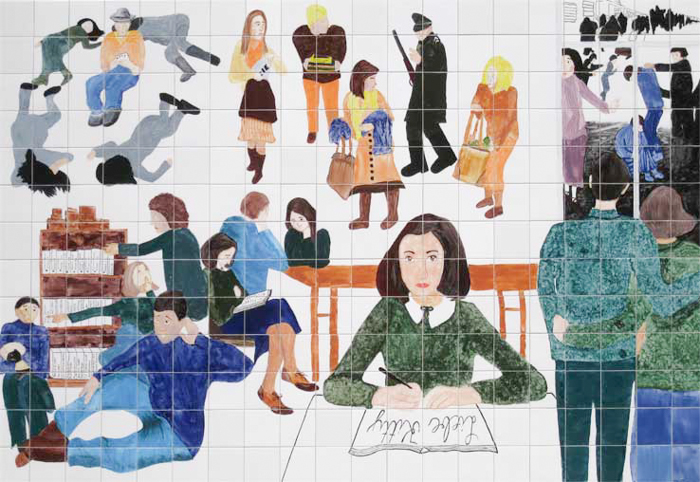 In 2008-2009 I was commissioned to design a commemorative column and a photo wall for Anne Frank. The works were intended for the Dornbusch district in Frankfurt in which Anne Frank had lived.The Anne Frank School is also located in Dornbusch and features the diary and life of Anne Frank as a continuous interdisciplinary theme in lessons. The school wanted a large artistic design with excerpts from the diary of Anne Frank. The school’s prinicpal, Till Lieberz-Gross, was able to convince the Frankfurter Sparkasse 1822 bank to sponsor this project. I was asked to supervise an extra-curricular work group for a school year, together with the artist Christiane Gehlar, with the aim or bringing such a project to life.It was my intention to help the pupils to develop as authentic images as possible and to implement these – images in which the thematic specifications of Anne were reflected and understood in relation to the pupils’ own lives, thoughts and feelings. I was also concerned with stimulating creative processes which were to be carried out by the pupils themselves and which could in the future be practiced in school life beyond the parameters of the extra-curricular activity group. As the school owns a kiln I suggested a tile painting made with weather-proof ceramic colors. Aware of the challenge, I purposely suggested processing images in the way it was practiced in Rembrandt’s workshop: The theatrical presentation of written representations. I managed to convince the school to hire the professional theater director, Rudolf Zeiler, who helped the pupils by way of impromptu theater to deepen their own understanding of the texts in a playful way and express this in scenic images. 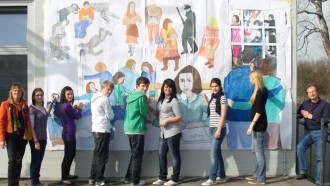 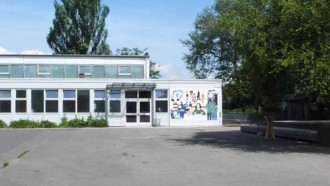 The theater scenes photographed by myself and Christiane Gehlar recorded the images acted out by the pupils and helped the subsequent planning and realization of the painting considerably. After the extra-curricular group had chosen a selection of photographed scenes and prepared an overall composition in small sketches drawn to scale, these were transferred 1:1 to cardboard. We then developed a color scheme and transferred the silhouettes of the 1:1 design on cardboard, to a mirrored tile. This preliminary drawing on the tiles was very helpful when we started painting with the ceramic colors. The architect and tiler Joachim Seidel agreed to permanently install the resulting image on a wall of the gymnasium.