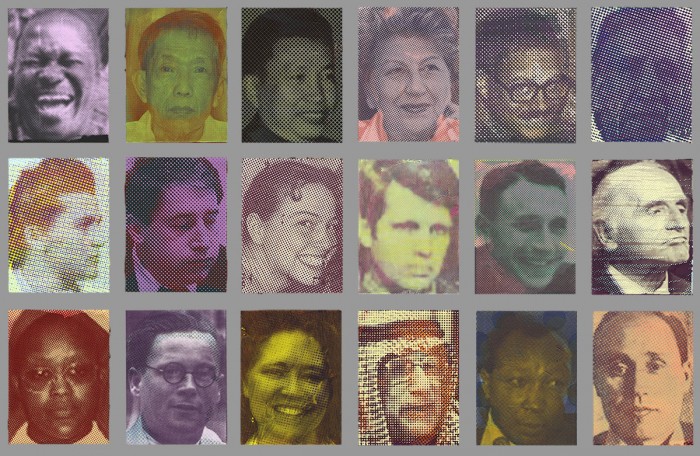 Born 1908, place of birth unknown
At the age of 32 he became Commissar of the Interior in Soviet Latvia. He served as Commissar of the Interior from 1940 to 1953, and as Commissar of State Security and the NKWD (predecessor to the KGB) he participated in numerous deportations. In 1949 alone he is said to have personally ordered 41,544 deportations. For this he was awarded a military decoration, the “Medal of the Red Flag”. He retired in the 1950s. His unchallenged life ended in 1994 when he was arrested in Riga. Accused in 1993, and in December 1995 charged by the Riga District Court with genocide, crimes against humanity, ordering the execution of political prisoners, personal participation in torture, requisition and other crimes, he was sentenced to life imprisonment and died in prison three months after the sentence was pronounced. During the process he admitted his responsibility for the deportations but only in as much as he was obeying orders.

Born in 1955, place of birth unknown
In 1991 the married man with five children began his political activities in Rwanda. He was president of a local section of the Mouvement Démocratique Républicain (MDR, Democratic Republican Movement) and from 1993 to his escape in 1994 was Mayor of the Taba commune. After he was arrested on October 10, 1995 in Lusaka he was transferred on May 15, 1996 to the UN tribunal in Arusha. On October 2, 1998 he was sentenced to life imprisonment for directly participating in genocide and as the representative of the International Criminal Tribunal for Rwanda, ICTR, for inciting and committing genocide, extermination, murder, torture, rape and other crimes against humanity. On December 9, 2001 he as extradited to Mali and imprisoned there.

Born 1968 in Pittsburgh
He was a particularly religious and active member of a Protestant church in Uniontown, Pennsylvania. In civilian life he worked as a prison attendant. The 23-year old man also served in the Iraq War in this capacity. His participation in the mistreatment and torture of prisoners is documented in numerous photos. Amongst other things he was charged with conspiracy to mistreat prisoners, assaults on prisoners and indecent actions in the Abu Ghraib prison, and in 2005, pronounced guilty by a military court in Fort Hood for nine of the ten charges.
The tribunal sentenced him to a ten-year prison sentence and ordered his dishonorable discharge from the army. Also directly after the trial he attempted to justify his actions. Although he knew, as a Christian, that he had behaved wrongly, but as a soldier he had to obey and unconditionally carry out orders from superiors. He had no proof of the orders.